Given here is information about Lucknow sightseeing tours. Read further and plan your tour to Lucknow India.
Lucknow : Lucknow Tour 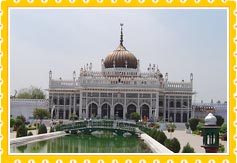 Lucknow is a beautiful city that still retains its old world charm. Your tour to Lucknow will be a truly memorable one when you travel in India. While arranging for Lucknow sightseeing tours, make sure that you visit the following tourist attractions that are worth seeing. The exquisite monuments that were built during the ancient times are still preserved for the present to see and cherish. So check out these tourist attractions as a part of Lucknow Tours.

British Residency Lucknow
The British Residency of Lucknow is a famous historical landmark of this place. It is now in ruins and has been declared a protected monument by the Archaeological Survey of India.

Jama Masjid
In the year 1423, Sultan Ahmed Shah constructed the Jama Masjid in Lucknow. It is built entirely with yellow sandstone and is known for its intricate style of design and architecture.

Clock Tower
Between the Bara Imambara and Chhota Imambara is the Clock Tower of Lucknow. This huge tower was constructed by Nawab Nasir-ud-Din Haider in the year 1880. The Clock Tower in Lucknow reaches upto a staggering height of 221 feet and is the tallest Clock Tower in India. The Clock tower also has the biggest fitted clock that cost the government around Rs. 1.75 lakhs at that time.

Moti Mahal
The Moti Mahal in Lucknow is one of the most beautiful monuments of India. The Nawab of Lucknow, Saadat Ali Khan, constructed it. The Lucknow Moti Mahal is also known as Palace of Pearls. The Moti Mahal is located on the borders of Gomti and provides a spectacular view of the city of Nawabs. The Nawabs used this palace to view birds in flight and spend time in leisure. There are three buildings that comprise the whole construction.

The two other buildings are known as Shah Manzil and Mubarak Manzil. These two buildings were added later by Nawab Ghazi-ud-din Haider. These were used by the Nawab to watch animal combats and animal fights. The Moti Mahal is preserved till date by the concerned authorities and is one of the most popular tourist attractions of Lucknow.

Lakshmana
Tila It is said that the original site of the town was actually at Lakshmana Tila. The story goes back to ancient times when the brother of Lord Rama, Lakshmana laid the foundation of the city of modern Lucknow. It was known as Lakshmanpur then. This place is supposed to be one of the earliest sites of human settlements in Lucknow.

Hussainabad Imambara
The Hussainabad Imambara is a major tourist attraction of Lucknow. The monument was built by Mohammed Ali Shah in the year 1837. The tombs of Mohammed Ali Shah and his mother are located over here. The walls of the monument are decorated with Arabic verses that have been carved beautifully by efficient craftsmen. The structure has an imposing white colored dome and many pillars or minarets. The interiors of the monument are worth seeing. They have been decorated beautifully with elaborate chandeliers, mirrors with gold frames, the majestic throne of the King. There are small miniatures of the Taj Mahal on either side of the monument. The Hussainabad Imambara is beautifully decorated during the festival of Moharrum. The whole structure is bordered with thousands of little bulbs, which give it a royal look when illuminated in the evening.