Lucknow has a very refined history. Read on to know more about the origin of Lucknow, India.
Lucknow: Lucknow History 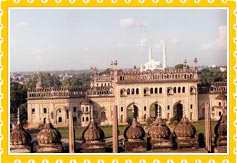 The origin & history of Lucknow is truly intriguing not just to the historians but also to the common man. The history of Lucknow can be traced back to the ancient times of the Suryavanshi Dynasty. It is said that Lakshmana, who was the brother of Lord Rama, laid the foundation of the ancient city. This was near the Gomti River on an elevated piece of land. It was then called Lakshmanpur. However, the city came into notice only during the 18th Century. To know more about Lucknow history, read further the information given below.

It was during the year 1720 when the great Mughal emperors began to appoint Nawabs in order to ensure smooth administration in the province. In the year 1732, Mohammad Amir Saadat Khan was appointed as the viceroyal of Awadh, in which Lucknow was a major province. It was then that the powerful dynasty of the Nawabs, which changed the history of this unknown place. Under the rule of the Nawabs, Lucknow flourished like never before. After 1755, Lucknow grew by leaps and bounds under the rule of the fourth Nawab Asaf-ud-Daula. Lucknow flourished in each and every aspect, which includes poetry, dance, music and the other finer aspects of the lifestyle of Lucknow.

It was when the British came to India that Lucknow was made into an administrative capital. There were many uprisings during the British rule by Indian radicals and many ghastly incidents left Lucknow with bad memories. However, after independence Lucknow was declared the capital of the state of Uttar Pradesh by the Government of India. Since then it has progressed beautifully, merging skillfully the past with the present.