The Jama Masjid of Lucknow is also known as Jami Masjid and is one of the most beautiful mosques in India
Lucknow: Lucknow Tourist Attractions: Jama Masjid Lucknow 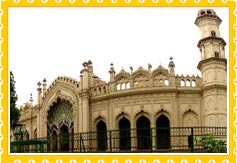 The Jami Masjid is located in the heart of the city of Lucknow. The structure has a combination of Hindu and Muslim architecture. The structure stands upright on 260 pillars that support 15 arched domes that different elevations. The domes are intricately designed and ornamented and are no less than an architectural splendor. The pillars have carvings that have been inspired from Hindu and Jain culture.

The courtyard is a vast area that measures around 75 meters X 66 meters. The western chamber is a big hall that is supported by 260 pillars. The tomb of Sultan Ahmed Shah lies on the Eastern side entrance. It has been beautifully preserved by the concerned authorities. Thus, one can say that Jami Masjid of Lucknow is an architectural wonder in every sense of the word.