Given here is information about the various types of music and dance that are exclusive to Lucknow, India.
Lucknow: Lucknow Culture: Lucknow Music and Dance 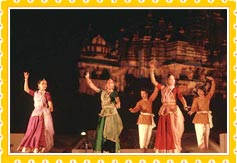 Lucknow is famous for its collection of classical music that is called as Hindustani classical music. The various ragas, compositions and beats were highly inspired by the poetry written by the famous poets and literary figures. Lucknow traditional music is highly evolved and every detail is taken into attention while singing so as to impart the right feel and the meaning.

The famous Lucknow Gharana was created in the royal courts of the Nawabs of Lucknow. This Gharana inspired major dance forms like Kathak, which is the classical dance of the north of India. Today, the rich tradition of music and dance of Lucknow is kept alive by various exponents and preachers through various concerts and cultural programmes.